Deep Learning has become a household buzzword these days. Google, Microsoft, and Tencent have developed distributed deep learning systems but, these systems are closed source softwares. Many of open source softwares such as DeepDist, Caffe, ..., etc are data parallel only. In this blog post, I introduce an Artificial Neural Network implementation of Apache Hama ML package and future design plan for supporting both data and model parallelism.

The lastest Apache Hama provides distributed training of an Artificial Neural Network using its BSP computing engine (the initial code was contributed by Yexi Jiang, a Hama committer, Facebook). In general, the training data is stored in HDFS and is distributed in multiple machines. In Hama, two kinds of components are involved in the training procedure: the master task and the groom task. The master task is in charge of merging the model updating information and sending model updating information to all the groom tasks. The groom tasks is in charge of calculate the weight updates according to the training data.

The training procedure is iterative and each iteration consists of two phases: update weights and merge update. In the update weights phase, each groom task would first update the local model according to the received message from the master task. Then they would compute the weight updates locally with assigned data partitions (mini-batch SGD) and finally send the updated weights to the master task. In the merge update phase, the master task would update the model according to the messages received from the groom tasks. Then it would distribute the updated model to all groom tasks. The two phases will repeat alternatively until the termination condition is met (reach a specified number of iterations).

The model is designed in a hierarchical way. The base class is more abstract than the derived class, so that the structure of the ANN model can be freely set by the user, as long as it is a layered model. Therefore, the Perceptron, Auto-encoder, Linear and Logistic regressor can all be uniformly represented by an ANN.

As described in above section, currently the data parallelism is only used. Each node will have a copy of the model. In each iteration, the computation is conducted on each node and a final aggregation is conducted in one node. Then the updated model will be synchronized to each node. So, the performance is one thing; the parameters should fit into the memory of a single machine. 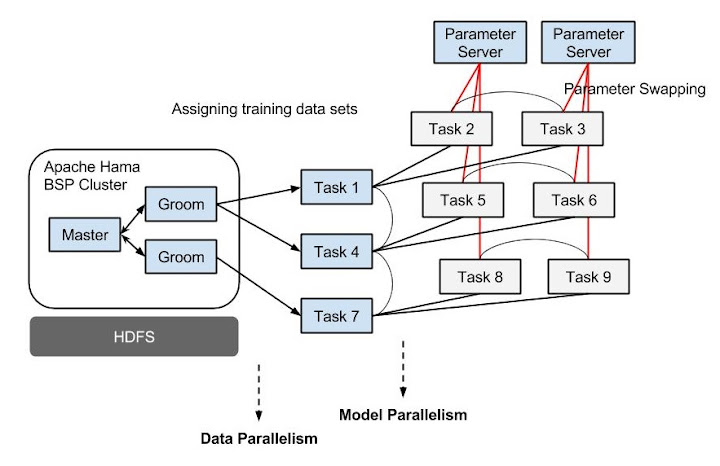 Each task asynchronously asks the Parameter Server who stores the parameters in distributed machines for an updated copy of its model, computes the gradients on the assigned data, and sends updated gradients back to the parameter server. This architecture is inspired by Google's DistBelief (Jeff Dean et al, 2012).

The new Programming API proposed by Edward J. Yoon will provide two user-defined functions, which the user can define the characteristic of artificial neural network model: Activation function and Cost function. Each function can be implemented by extending ActivationFunction and CostFunction abstract classes like below:


The following properties are specified in the Job configuration:


The following is the sample design regarding how to create a job for training of three-layer neural network:

Apache Hama team is pleased to announce the release of Hama v0.7 with new features and improvements.

What are the major changes from the last release?

The important new feature of this release is that support the Mesos and Yet Another Resource Negotiator (YARN), so you’re able to submit your BSP applications to the existing open source and enterprise clusters e.g., CDH, HDP, and Mesosphere without any installation. In addition, we reinforced machine learning package by adding algorithms such as Max-Flow, K-Core, ANN, ..., etc.

There are also big improvements in the queue and messaging systems. We now use own outgoing/incoming message manager instead of using Java's built-in queues. It stores messages in serialized form in a set of bundles (or a single bundle) to reduce the memory usage and RPC overhead. Unsafe serialization is used to serialize Vertex and its message objects more quickly. Another important improvement is the enhanced graph package. Instead of sending each message individually, we package the messages per vertex and send a packaged message to their assigned destination nodes. With this we achieved significant improvement in the performance of graph applications. The attached benchmarks were done to test scalability and performance of PageRank algorithm for random generated 1 billion edges graph using Apache Hama and Giraph on Amazon EMR 30 nodes cluster. Note that the aggregators was used for detecting the convergence condition in case of Apache Hama.

After a month of testing and benchmarking this version will bring substantial performance improvements together with important bug fixes which significantly improve the platform stability. We look forward to add more and more and see our community grow. The primary objective of the technical plans are:

The release artifacts are published and ready for you to download either from the Apache mirrors or from the Maven repository. We welcome your help, feedback, and suggestions. For more information on how to report problems, and to get involved, visit the Hama project website[1] and wiki[2].

The Apache Hama team is pleased to announce that we’re now supporting not only the Mesos but the YARN (Thanks to Minho Kim who is a main contributor of YARN module).

YARN is the resource management technology that lets multiple computing frameworks run on the same Hadoop cluster using the same underlying storage. So, for example, a company could analyze the data using MapReduce, Spark, and Apache Hama.

“From the next release, you’ll be able to submit scientific BSP applications to the existing open source Hadoop, CDH, and HDP clusters without any installation” said Edward J. Yoon(@eddieyoon), a original creator of Apache Hama. 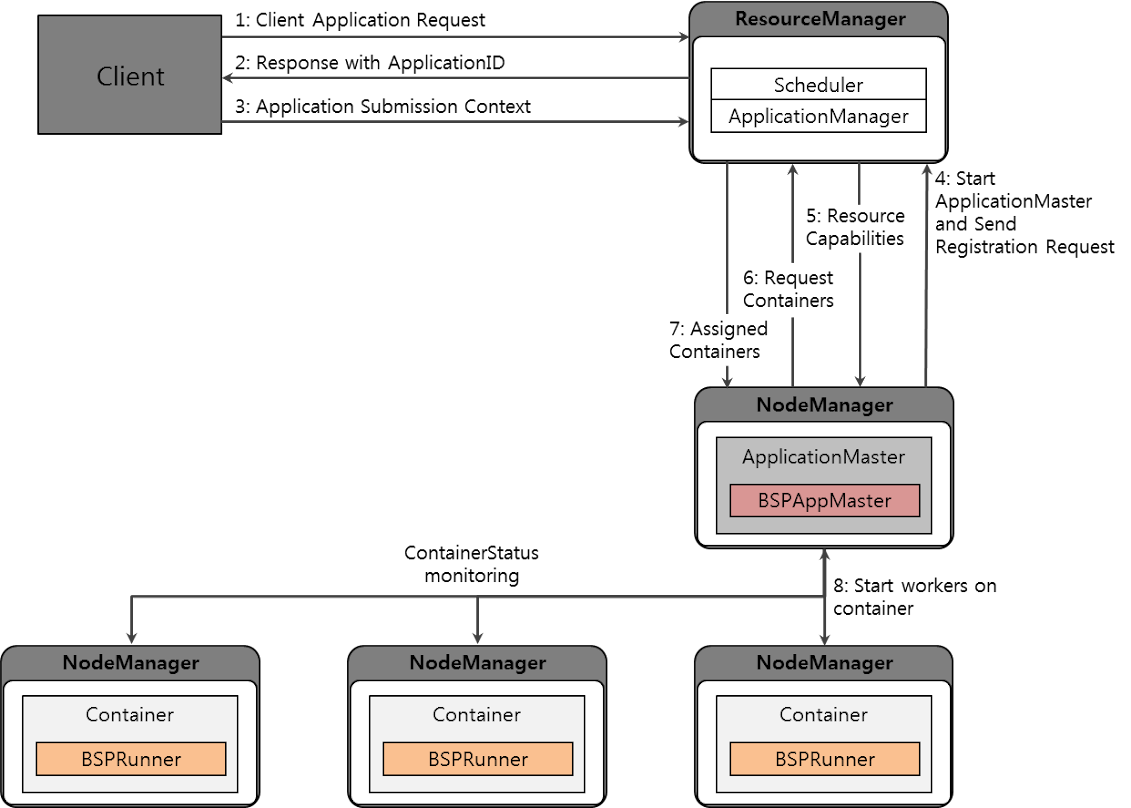 Meanwhile, we’re also working on support the HPC environment such as InfiniBand and GPUs — According to General Dynamics[1], they already proved the 10x performance improvement of Apache Hama on HPC cluster — and also plan to support deployment and automation configurations to the Hybrid Clouds for solving various problems of Manufacturing Engineering, Science, Finance, Research areas.

This contribution is mainly coming from Samsung Electronics. “Unlike most web services companies, our challenge is numerical or signal data, not text data. That’s why we’re investing in High-Performance computing for scientific advanced analytics.” said SeungHun Jeon, a Head of Cloud Tech Lab at Samsung Electronics.

“Since we build our own analytics platform in the Cloud by leveraging open source technologies such as Apache Hadoop, Storm, and Hama, we intend to keep making contributions to the Open Source communities. ” added Hyok S. Choi, a Principal Software Engineer at Samsung Electronics.

Apache Hama[2] was established in 2012 as a Top-Level Project of The Apache Software Foundation. It provides High-Performance BSP[3] computing engine on top of Hadoop.

The Hama team is pleased to announce the Hama 0.6.4 release.

This release improves memory usage by 3 times better than before (without significant performance degradation) and adds runtime message compression.

The artifacts are published and ready for you to download[1] either from the Apache mirrors or from the Maven repository. We welcome your help, feedback, and suggestions. For more information on how to report problems, and to get involved, visit the project website[2] and wiki[3].

Already you might know, the Apache Hama project provides a set of machine learning algorithms which can be applied in applications with very large scale data in multiple domains.

In this post, I explain how to run BSP-based K-Means algorithm using Apache Hama, assume that you have already installed Hama cluster and you have tested it. 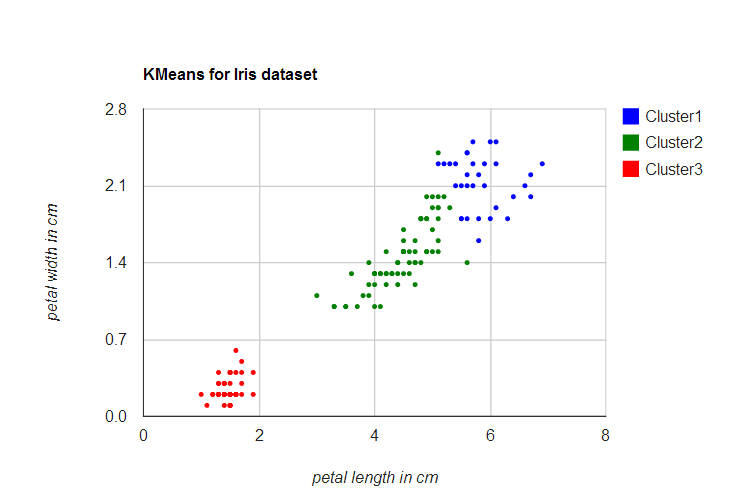 And Here's performance comparison with Mahout. 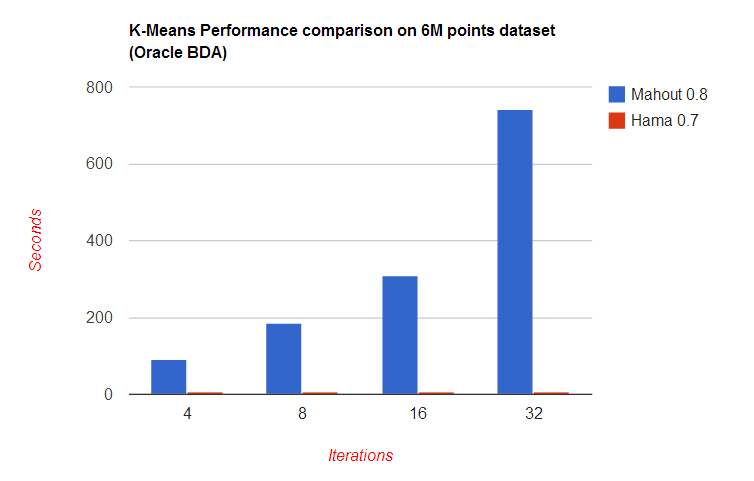 This release is the first release as a top level project, contains two
significant new features (Message Compressor, complete clone of the
Google's Pregel) and many improvements for computing system
performance and durability.

The artifacts are published and ready for you to download[1] either
from the Apache mirrors or from the Maven repository. For more
details, please take a look at our website[2] and wiki[3].

Many thanks to the Hama community for making this release possible.

The Hama team is pleased to announce the release of Apache Hama 0.4-incubating under the Apache Incubator.

Thanks to the Hama and Apache Incubating community for helping grow the project!

The Hama team is pleased to announce the release of Apache Hama
0.3-incubating under the Apache Incubator.

Thanks to the Hama and Apache Incubating community for helping grow the project.

The Hama team is pleased to announce the release of Apache Hama 0.2.0-incubating under the Apache Incubator.

Thanks to the Hama and Apache Incubating community for helping grow the project.

How will Hama BSP different from Pregel?

Firstly, why did we use HBase?

Until last year, we tried to implement the distributed matrix/graph computing algorithms based on Map/Reduce.

As you know, the Hadoop is consists of HDFS, which is designed for commodity servers as a shared nothing model (also termed as data partitioning model), and a distributed programming model called Map/Reduce. The Map/Reduce is a high-performance parallel data processing engine, to be sure, but it's not good for complex numerical/relational processing requires huge iterations or inter-node communications. So, we used HBase as a shared storage (shared memory model).

Why BSP instead of Map/Reduce and HBase?

However, there were still problems as below:

Therefore, we started to consider about message-passing model, and decided to adopt the BSP (Bulk Synchronous Parallel) model, inspired by Pregel from Google Research Blog.

According to my understanding, Pregel is graph-specific: a large-scale graph computing framework, based on BSP model.

How will Hama BSP different from Pregel?

Hama BSP is a computing engine, based on BSP model, like a Pregel, and it'll be compatible with existing HDFS cluster, or any FileSystem and Database in the future. However, we believe that the BSP computing model is not limited to a problems of graph; it can be used for widely distributed software such as Map/Reduce. In addition to a field of graph, there are many other algorithms, which have similar problems with graph processing using Map/Reduce. Actually, the BSP model has been researched for many years in the field of matrix computation, too.

Learn about Hama by reading the documentation.

We're introduced in the BSP Worldwide.