Here are a few selected topics from Day 2 of the Apache OpenOffice track at ApacheCon Europe.

For full coverage, see the reports from Day 1 and Day 3.

OpenOffice in the cloud: online version

Judging by the number of questions made during the presentation and by the number of "new" faces in the audience, the star of Day 2 at the Apache OpenOffice track in ApacheCon Europe was Jian Hong Cheng and Fan Zheng's presentation about "Cloud Apache OpenOffice Based on HTML 5". The prototype implementation shown during the presentation relies on a "headless" instance of Apache OpenOffice that runs on a remote server, listens to the actions the user performs in the browser, and provides XML snippets in response, which are in turn rendered in the browser. Although the code is still at an early stage, this is an exciting development! Many Apache folks attending the session provided feedback and suggested technologies, so this looks like a project where Apache OpenOffice can benefit from input from the Apache community at large. 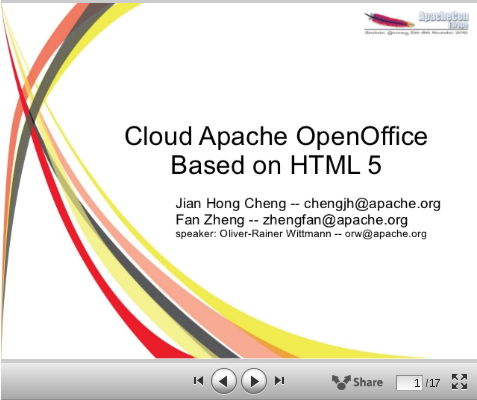 In related news, the presentation by Xiu Li Xu, Kejia Ye, qi hui, Shenfeng Liu, DaLi Liu focused on how to integrate OpenSocial with Apache OpenOffice to accelerate the content sharing and support the business in cloud. Two social extensions for Apache OpenOffice were demonstrated. These improvements will already be implemented in Apache OpenOffice 4.0, coming in early 2013.

Bashing Apache OpenOffice for a good cause

A series of talks today had a peculiarity in common: they were all highly critical of specific technical features of Apache OpenOffice. But they did it for a good cause: these parts have recently been improved, or will be soon, in the undergoing major effort towards a more maintainable code base, offering easier entry points to developers but preserving the current stability of the code:

Several talks mentioned how Apache OpenOffice can better integrate with the Apache community at large: opportunities for cooperation are huge and we definitely look forward to exploiting them.

And those who still had energy after a full day of talks gathered just before dinner for a community panel. A lot of ideas came out of the group, including: creating a new entry point for Apache OpenOffice press requests, welcoming requests in different languages; getting Apache OpenOffice published in App Stores; packaging Apache OpenOffice for the most common (or all!) GNU/Linux distributions; setting goals for version 4.0, like doubling the number of supported languages.

You can see a 3D rendering of the group here (courtesy Andrew Rist): http://360.io/LWdsMb ; if you are curious to know who's who, in the flat version at http://360.io/LWdsMb/f you see (left to right): half Juergen, Oliver, Andrea, Mechtilde, Herbert, Caroline, imacat, Christoph, Michael, Svante, Dwayne, Pedro, Andre, Rony, empty, Svante again (!), Armin, half Juergen.